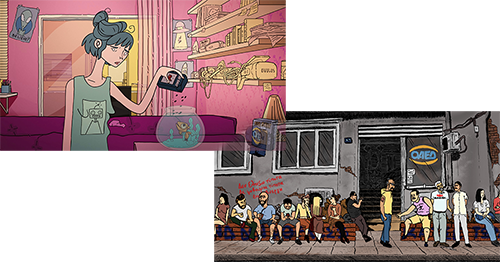 Award winners Aris Kaplanidis, Sergio Ko, Elias Roumeliotis and Dimitris Savvaidis with coordinator Alekos Papadatos talk about their animation work and the future of the greek animation industry. What someone needs to have so he/she can succeed.

Aris Kaplanidis and Elias Roumeliotis are film directors, screenwriters and animators. Creators of the animation short film “From The Balcony” (Soul Productions, Greek Film Centre) which won 20 awards, one of them being the Hellenic Film Academy Award for Best Animation of 2022 while the film continues it’s journey through international film festivals. In 2019 they co-founded BrosInArts Animation Studios and are now exclusively producing original fiction animation projects, while they already have a catalog of commissioned work in short films, music videos and commercials (such as the Official Spots for Greek Film Centre 2022 and Olympia Film Festival 2022). They are currently in pre-production of their first feature length animation film titled: “Women of 1922”. A docu-animation built around the oral accounts of the women who survived the Asia Minor Catastrophe.

Sergio Ko is a multi award winning designer/director using “please insert coin” as his production alias. In 2021 Sergio Wrote and Directed the Animated short “ECHO”. In the Films festival run so far it has garnered over 10 international awards Including two at the renowned “Los Angeles Animation Festival” the “Filmfest award for excellence” & “Silver Character Based” and also won “Best Animated Short” at the “Regina International Film Festival” a Canadian screen award qualifier. From 2014 to 2019 he was a co-founder and part of the EBGE and ERMIS award winning holistic design and film bureau, WITHIN.

Since the summer of 2018 Sergio is part of MAL-VI ( http://www.mal-vi.com ), the award-winning, interdisciplinary design and communication agency based in London, UK and Thessaloniki, Greece. From 2015 to 2016 he was a member of “synergastirion” a collaboratory of creatives with a space in “Stoa Emporon” (Syntagma sq. Athens). During the year he curated the multi-disciplinary installation “don’t push your luck” witch featured illustrations from top Greek creatives, silk screen printing and an interactive projection mapping game. Sergio has vast production experience on set and in post production starting as a 3d animator and continues as a director and a set designer for various tv shows and television commercials for the major production companies in Greece. Sergio was a founder of ASIFA Hellas and now a proud member of ASIFA Hollywood and Annie Award voter.

Dimitris Savvaidis was born on New Year’s of 1976 in Thessaloniki … he went to school, studied, worked, but finally … he found comics and animation from a young age the right means to tell the stories he writes since they do not limit the creator’s imagination. Founder of AddArt and the Funny Tales studio with animation productions, comics publications and much more since 2014. So Dimitris took the role of producer and created 2 animation series for FOX & Disney+, Video Clip, Short Films like ECHO already with 6 awards and more. He is the Director and founder of TAF (Thessaloniki Animation Festival). Member of a Think Tank in Germany for green solutions and new technologies. Participation in the Biennale of Young Arts Moscow 2018, and the Biennale of Thailand 2018. He shares his knowledge in Workshops and Guest Lectures at universities such as AUTH Department of Fine Arts and Cinema, TEI of Information Technology, Architecture Volos, Fine Arts of Florina, University of Western Attica MA Animation, Fine Arts & Design Hamburg, Business School University of Birmingham as well as at the Babeș-Bolyai University Film Department in Cluj in Romania.

Alecos Papadatos was born and raised in Greece. He studied economics and philosophy but eventually he was drawn to animation and comics. He has worked as an animator, press illustrator and comics’ author in France and Greece. He has designed the graphic novels Logicomix and Democracy (Bloomsbury) which have been published in several languages. He is now working on a new graphic novel based on the life of Aristotle, to be published by Dargaud and also teaches masterclasses and holds workshops on storyboarding, animation and comics’ design in Greece, Turkey, Poland, France and England. He is fluent in English, French and of course Greek.