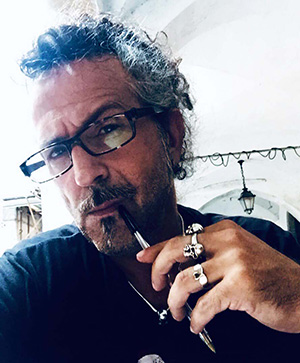 Luca Laca Montagliani is a comic writer, designer and publisher, but he is also involved in music and theater.

He has collaborated with many publishing houses and comic creators, since 2007 he directs the Annexia Cultural Association, which until its end of his tenure in 2014 he had undertaken to republish the work of the teacher Giorgio Rebuffi (Lupo Pugaciòff, Cucciolo, Tiramolla), while he also published his personal comics Pasol and Pasolik.

In 2016 he created the Vintagerotika series for the Italian market, working on classic characters of Italian comics with the aim of reviving the sexy anti-heroines drawn by Renzo Barbieri and Giorgio Cavedon, from the 1960s and 1970s, with new ones stories, written and designed by great Italian creators. Since 2018 he has already released seven albums: Zora, Jacula, Cimiteria, Ulula, Lucifera, Yra and Vintagerotika Pin-ups.

2021 sees the release of the third wave of the Vintagerotiκa series, six new albums Suspiria, publishes an unreleased comic by Roberto Baldazzini and collaborates on musical and comic level with Steve Sylvester’s hard-rock band Death SS. The Suspiria stories are very successful in Brazil and Germany, and soon in Greece by Jemma Press.