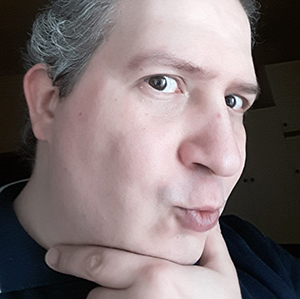 One of the most important representatives of the contemporary Italian school of Disney comics, Vitale Mangiatordi began his career in 2003. From one-page stories with Magica and Ludivh, he moved on to the most extensive adventures until 2004, with the story “Unexpected Alliance” to mark the starting point of an interesting course. He participated in many small (“P.A.P.I.”, “Junior Duck”) or large (“The New Adventures of Phantom Duck”, “The Sorcerer Lords”) subseries, making his own mark with fresh and clean design line that characterizes him. His participation in “Secret Agent Donald Duck” is considered more important, being one of the main artistic contributors to the original series with the world’s most famous duck in the role of a… spy.

Also, together with Roberto Gagnor, they inspired the superheroic alter ego of Jenny, Scrooge McDuck’s eternal suitor, Jen Jett, while with Tito Faraci they created a Disney “What if?”, the “Universo PK” series. Experimental and pioneering, the designer from Genoa does not hesitate to synthesize in his creations the many stimuli that have shaped him, as a person and as an artist, some of which are manga and anime, role-playing games and video games.