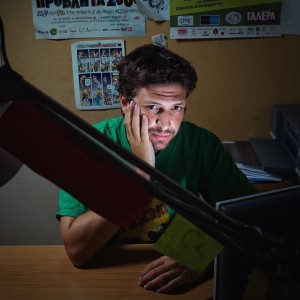 Αntonis Vavagiannis was born in Athens in 1981. He studied education and music in Athens and works as a primary school teacher. He is a founding member of the alternative rock band “Empty Frame”. His other love is designing comic books. His most famous creation is the “Kourafelkythra” a comic strip series which was translated in English as “Balderduck”. It started as a webcomic in 2007 and is still being published online by socomic.gr.

There have been more than 10 published works of Antonis, not only from the “Kourafelkythra” series but also “Proteleftaioi” and “O Fotografos” which he created with Thanassis Petropoulos and Spyros Derveniotis respectively.

In his free time he enjoys writing bios of himself in the third person.