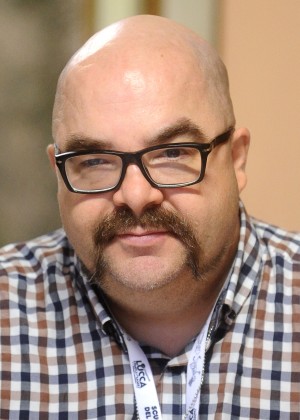 Mark Rein•Hagen is the creator of the World of Darkness, the Storytelling system and the games Vampire: The Masquerade, Werewolf: The Apocalypse, Wraith: The Oblivion and Changing: The Dreaming. His first published game was Ars Magica. He is the co-founder of White Wolf & Lion Rampant and was on of the board of directors of Wizards of the Coast, before and after the release of Magic: The Gathering. Some remember him as a producer & writer on the TV series Kindred: The Embraced, but he doesn’t remember much about Hollywood. He has also spent many years as a international political consultant, mostly in countries people have never heard. He is currently working on the RPG and board game system/setting I AM ZOMBIE™ and is the founder of Make•Believe games™ and the breather benefactor of Purgatory Press™. He lives and works in Tbilisi, Georgia (the other Georgia) with his wife Piso and his children Giselle and Sandro, working on his evil-genius 21 year master plan for XENOFACTOR™ (its about us really, not the aliens).