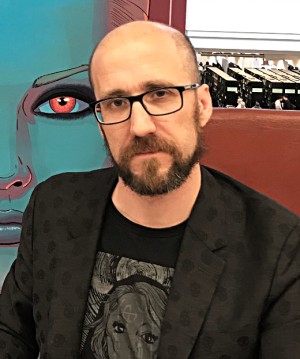 Kieron Michael Gillen is a British comic book writer and former computer game and music journalist. He is known for his creator-owned comics Phonogram and The Wicked + The Divine, both created with artist Jamie McKelvie and published by Image Comics, and for numerous projects for Marvel Comics, such as Journey into Mystery, Uncanny X-Men, and Young Avengers. Gillen has worked for publications such as PC Gamer UK, The Escapist, Amiga Power, Wired, The Guardian, Edge, Games Developer, Develop, MCV, GamesMaster and PC Format, among others.

On the web, Gillen was a founder of and major contributor to the PC gaming site Rock, Paper, Shotgun and a games reviewer for Eurogamer. He is notable for his manifesto[3] for New Games Journalism, more simply the model of New Journalism applied to video game journalism. In 2000, Gillen became the first-ever video game journalist to receive an award from the Periodical Publishers Association, for New Specialist Consumer Journalist.

Kieron Giellon will be located at Jemma Books and Comics booth signing his comic THREE.