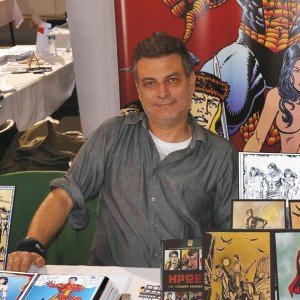 Kostas was born in 1969 and studied Nursing at the National & Kapodistrian University of Athens.

For 25 years, he illustrated a great variety of comic stories (epic fantasy adventures, sci-fi, erotic, fairytales, western, etc.) for various Greek publishers, and participated in many comic exhibitions. Among others, he drew the adventures of the legendary comic hero IL GRANDE BLEK that were also translated & published in Italy by Edizioni If Publications. Also, he is the artist that relaunched the new adventures of the two famous Greek comic heroes MIKROS IROS and MIKROS COWBOY. In 2016, he illustrated the graphic novel about the Greek financial crisis “TETRAKOSARIS”, that was published by MIKROS IROS Publications. He is also illustrated children fairytales (2015-2017) & and currently Greek mythology heroes books, (2107-today) for A.A. Livani Publications.

He lives in Athens with his wife Ioanna and his son George.