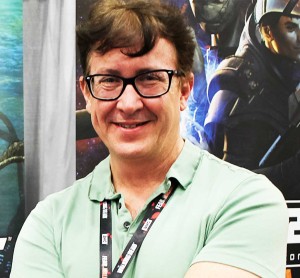 Brian Haberlin is an American comic book artist, writer, editor and producer. He is best known as the co-creator of the Witchblade franchise and for his digital art style.

In the beggining of his career Haberlin intended to work as a penciller, but he rose to fame in the comics industry as a colorist given his knowledge of computer coloring processes. Haberlin formed his own studio in 1995, producing commercial illustrations and digitally coloring for Marvel Comics, DC Comics and Image Comics. He then started Avalon Studios with Whilce Portacio in 1998. Avalon Studios published Stone, a fantasy series which incorporated elements of Filipino mythology,[8] Area 52, a science fiction title set to be adapted into a feature film, with a tentative release date of 2013,[9] and M-Rex, which has been adapted into the successful Cartoon Network series Generator Rex.

Haberlin became Editor in Chief for Todd McFarlane Productions in 2006, and penciled and inked its flagship title, Spawn, for two years during David Hine’s run as writer.

Currently he is running Anomaly Productions is a cutting-edge media company launched by creators Brittenham and Haberlin. Anomaly Productions combines stunning artwork and rich stories to build deeply immersive worlds than can be experienced across multiple platforms and in a multitude of ways. Anomaly is its first release, with three other projects in various stages of production.