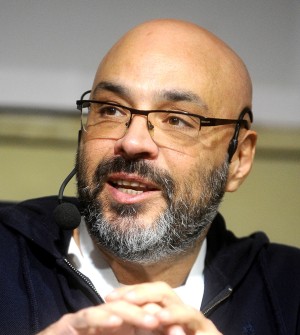 Andrea Freccero lives and works in Genoa, the city where he was born in 1968. He has been collaborating with Disney Italy for about twenty-five years, illustrating books but especially drawing comic stories and covers. After completing his studies in Genoa until he graduated from high school in 1986, he entered the studio of Giovan Battista Carpi, one of the masters of Disney’s Italian school where he learned the basics of comics and then entered the Disney Academy, where he attended lessons by Giorgio Cavazzano. After collaborating on a story by Carpi in 1989 he made his debut for Disney Italia on the weekly Topolino with the story “Topolino and the big case”, written by Carlo Panaro. Over the years he has taken part in various editorial projects as a creative consultant, character designer, and much more. He designed puppets for TV or story boards and advertising illustrations. Some of his collaborations are with The Walt Disney Company (Italy, America) – Egmont Ehapa (Denmark, Germany) – Sanoma, (Finland) – Glénat (France) – RCS (Italy) – Arnoldo Mondadori Editore, (Italy) – – Ferrero, Soremartec, MPG, (Italy), Philips Italia, Panini Comics, Rovio Entertainment (Finland), Giunti Editore, IDW (America), Abril Publishing (Brazil), Goody Publishing (Portugal). Currently he also serves as the art director of Panini Comics.